On Monday night, MPs voted 472 to 117 to replace UK’s Trident nuclear weapons system, following a five and half hour Parliamentary debate. The atmosphere was tense; the united SNP benches made an impassioned case against Trident from across the room, while the Conservatives all voted in favour, but for the Chair of the Foreign Affairs Select Committee who voted against the motion. Many arguments were aired both for and against Trident. But what kind of arguments did the MPs make?

At BASIC, we tried to categorise and rank each type of argument, both for and against replacement (see Appendix). The typology reveals what kind of arguments MPs felt had force or best represented their constituents. The analysis helps understand the framing informing opinions on nuclear weapons in the UK Parliament, and is instructive to those researching, lobbying, or commentating on nuclear weapons issues.

Most of the arguments were familiar and traditional. Advocates of Trident talked of notions of UK security, the perceived benefit to the UK’s role in the world from nuclear weapons possession, or the benefits to the UK from the technological innovation, jobs and skills that accompany the project.

Opponents highlighted the project’s high but unquantified costs, the need for investment in conventional defence capabilities or in wider budgetary matters like health care and education, the moral case against nuclear weapons, the opposition to Trident being based in Scotland, and emerging technological vulnerabilities to the submarine-based delivery system.

Just as interesting are the arguments that were hardly or not at all mentioned: arguments for or against continuous patrolling, which was meant to be a significant focus in the motion before Parliament, were hardly mentioned. Reference to the UK’s legal obligations to disarm and prevent proliferation, the risk of hosting nuclear weapons, and the difficulty of continuing to host Trident if Scotland becomes independent were also largely absent. These are explored at the end of this post.

Arguments in favour of Trident

According to this analysis, the arguments most frequently aired were as follows: 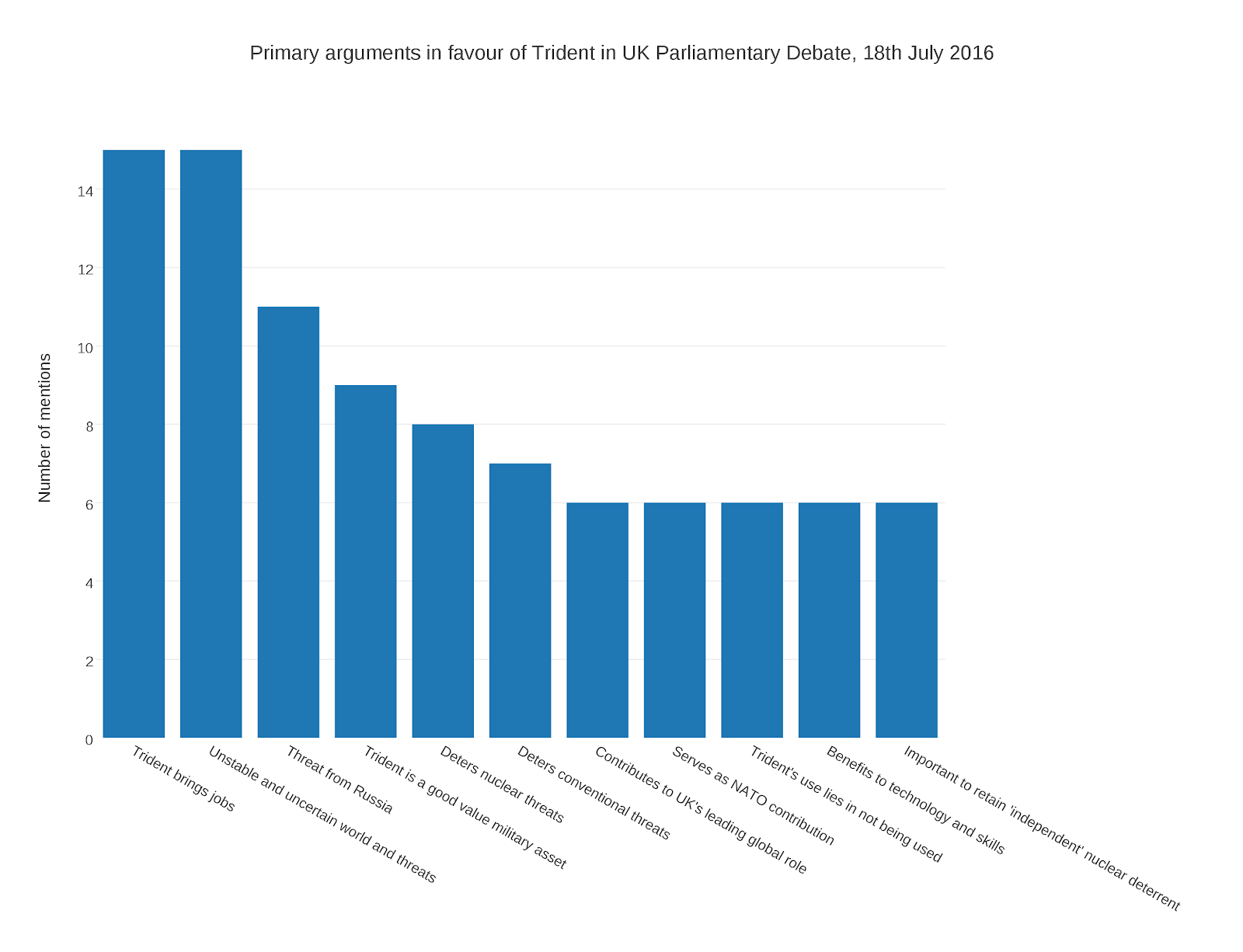 Trident proponents primarily focussed on the language of security. Significant reference (15) was made to nuclear weapons’ purported capacity to deter both nuclear and conventional threats, with the clearest threat being understood to be Russia (11). Russia was followed by North Korea (4), and a handful of oblique mentions of China and Iran, which seems to have fallen off the agenda since last year’s Iran Deal, in contrast to the debate in 2007. The language of our “unstable” or “uncertain” world (15) was used over and again, echoing the tone of the 2015 Strategic Defence and Security Review, primarily by Trident proponents but occasionally by opponents too.

From a domestic perspective, the values of skilled jobs (15), and the benefits of those technological skills to the wider economy (6), featured heavily in speeches, far more than any internationalist or legalist arguments. The moral argument against Trident typically met the riposte that Trident is not intended to be used, but that therein lies its value (6). The immorality of risking major power war through nuclear disarmament was also mentioned several times.

From a foreign policy perspective, Trident advocates maintained that Trident is a positive contribution to NATO (6), but that in spite of NATO, the UK needed its own “independent” nuclear deterrent (6), which is permissible because the UK is a ‘responsible’ nuclear state (5). Moreover advocates argued that Trident contributes to the UK’s leading role in the world (6), and that its position at the ‘top table’ (such as on the Security Council) is dependent on its possession of nuclear weapons (5). 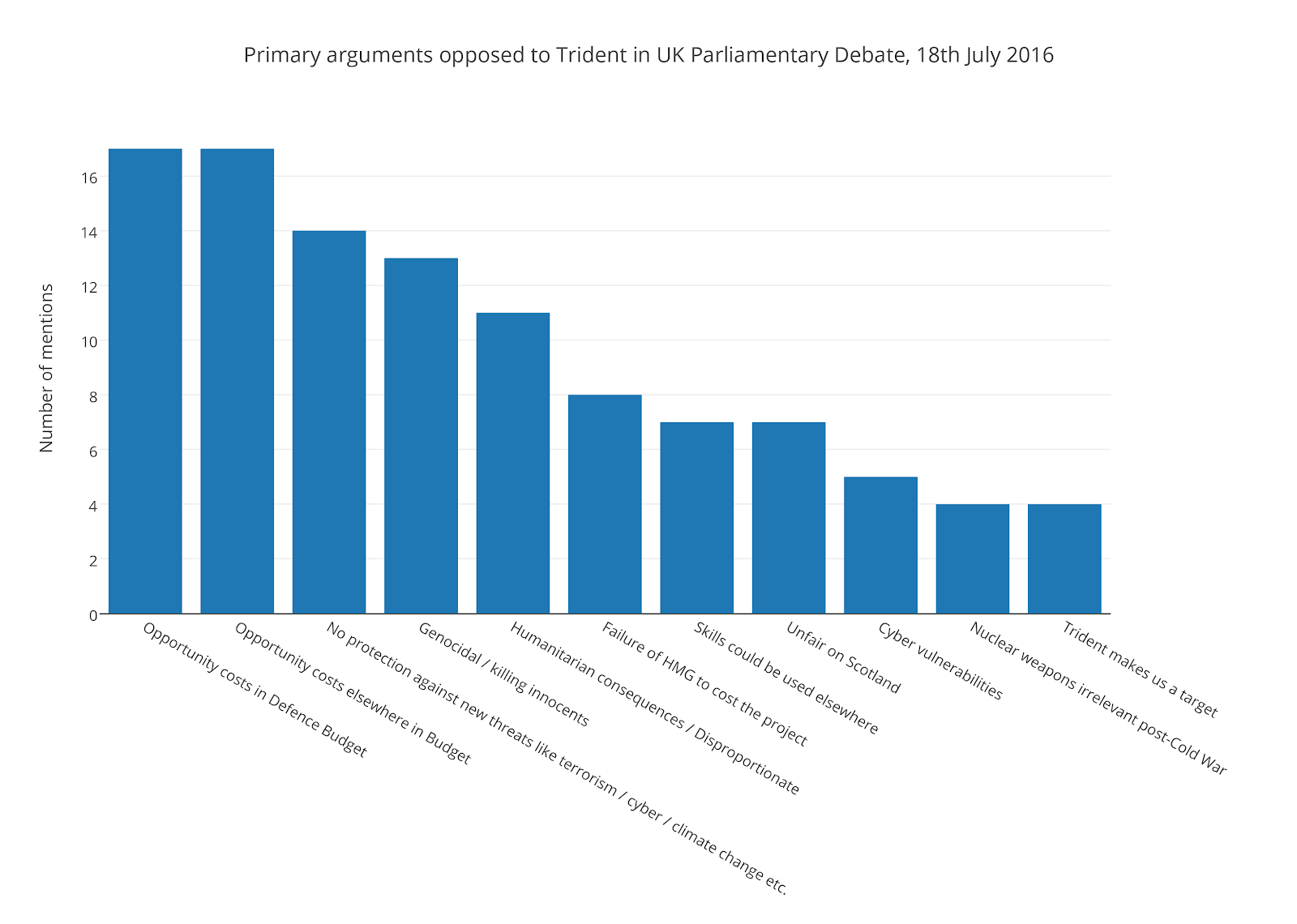 Many arguments were associated with the opportunity costs. Some of these arguments were made in reference to defence spending alone (17): the Shadow Defence Secretary noted that “to maintain one single capability at the expense of losing many others would not strengthen our defence, but weaken it,” and the SNP expressed dissatisfaction that there are currently no surface vessels in Scottish waters. It was also argued repeatedly that nuclear weapons offer no defence against 21st century threats such as terrorism, cyber, or climate change (14), that they may be vulnerable to cyber (5) or emerging undersea technologies (4), or that they are no longer relevant post-Cold War (4).

Other arguments focused on the opportunity costs to other areas of public spending such as health care, education and other services (17). Implicit or explicit in many of these were the additional economic pressures that are being felt by Brexit. The perceived failure of the Government to provide a reliable costing for the project (8) was also a frustration for many MPs. Angus Robertson repeatedly called on the front bench to announce the “through-life cost for Trident’s replacement.”

Several arguments were made on moral lines. Eleven significant references were made to the disproportionate humanitarian costs of nuclear weapons use, with speakers taking issue with the unavoidable killing of innocent people in the event of use (13).

From the UK-perspective, jobs also featured in arguments against Trident (7), on the basis that those skills could be more productively used in environmental and other socially beneficial engineering projects, and that Trident jobs were extremely expensive. Many SNP speakers expressed the idea that it was unfair to base nuclear weapons in Scotland (7), where they are least popular.

Few or no mentions

Few references were made to alternatives to Trident operated on full-CASD, the principle that an SSBN must be at sea at all times. Debates about alternative platforms and postures have been popular over the last few years, largely owing to a Liberal Democrats proposal for a more minimal deterrence while in the Coalition, with one proposal being to build two or three rather than four new SSBNs. However, the official Trident Alternatives Review (2013), which erroneously has been interpreted by some Parliamentarians as supporting like for like replacement, weighed heavily with some Parliamentarians, despite the new developments of surgent Scottish nationalism and emerging undersea technologies. The Defence Secretary dismissed the latter out of hand in his closing remarks. Another reason may be that the motion as it was phrased offered little leeway for an alternative.

A conspicuous absence on both benches was any discussion of the international legal regime surrounding nuclear weapons; the word “legal” itself wasn’t mentioned once. Where reference was made, it was to suggest that UK should maintain its deterrent to prevent other states from acting illegally. For instance, the Prime Minister warned of “countries [referencing North Korea] that wish to acquire nuclear capabilities illegally.” The notable exception was the Plaid Cymru MP Liz Saville Roberts, who suggested that Trident could never bring peace and stability in compliance with international law in the way that conventional forces can.

Treaties were given cursory mention, though a small number of MPs talked of the Non-Proliferation Treaty (NPT), particularly Jeremy Corbyn. Theresa May argued that the UK continues to play a lead role in negotiations for the Comprehensive Nuclear-Test-Ban Treaty (CTBT) and Fissile Material Cut-off Treaty (FMCT), the only reference to these treaties. Jeremy Corbyn also called upon the Michael Fallon, Defence Secretary, to pledge his commitment towards a Middle East Nuclear Weapons Free Zone. Finally, Corbyn and Caroline Lucas both made reference to the ongoing negotiations for a global ban treaty on nuclear weapons taking place in the UN OEWG of Nuclear Disarmament.

These trends could be explored with much a deeper analysis or comparatively, perhaps by examining the 2007 Trident debate, earlier debates, or those in other Nuclear Weapons States. However, this analysis serves as a starting point for assessments about the perceived salience of nuclear weapons in the public sphere. Forthcoming analysis from BASIC will draw further conclusions.

Before the debate began, we listed the primary categories under which arguments about nuclear weapons are typically made. For instance, the headings we used for the arguments in favour were: Foreign Policy, Security, Domestic Factors, Moral, Political and Alternatives to CASD. We then brainstormed individual qualitative arguments and inserted them under the relevant heading, trying to avoid repetition. For instance under the Security heading, one was the argument that nuclear weapons deter nuclear threats, another that they they deter conventional threats, and another that we live in an unstable and uncertain world, and so on, creating a typology. Each time an MP made more than a passing reference to one of these arguments (a ‘significant reference’), we would log their name and the time in our spreadsheet.